The 2019 AGM was be held at the Nacton Village Hall on the 13th November 2019 at 19:30 prompt. The minutes of the meeting will be circulated by the Club Secretary Mr Mark Adams prior to the event.

The AGM is a must attend event for players and non-players associated with the club so that all issues with on-field and off-field can be discussed and agreed upon by all. Remember this is your cricket club and it would great to have as much input as possible so that the club continues to be successful. 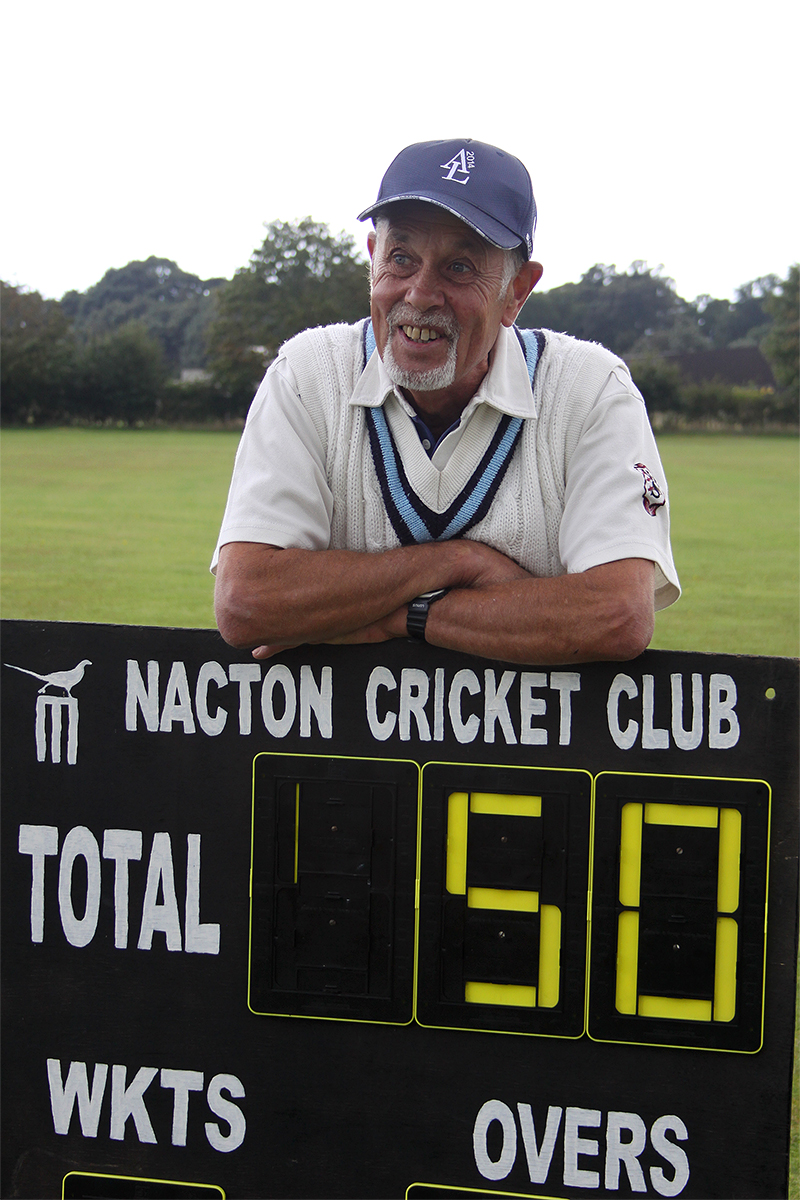 The 2017 season was a very successful one on the playing front. The Saturday team finished in a respectable position in a very competitive division 5 and the Sunday team were runners up in Section B.

Well done Jonathan Warner, Alex Brunt and Lewis Rush for team selections, it was good to see Email back in use!

Eleven centuries were recorded this year, Sam Johnson 6, Ben Glading 2, Jon Warner 2 and Jack Coomber 1, 28 half centuries were also recorded. Sam Johnson scored an incredible 1629 runs which must be a club record. Corey Stockwell posted the best bowling figures 7 for 44; John Bafico and Ellis Baker took 5 wickets each in an innings. Top wicket takers were Corey Stockwell 35 and Jack Coomber 31.

Thanks to John Bafico for printing and supplying the fixture cards and also his watering duties. Clive Nunn and David Simmonds have contributed throughout the season to the up keep of the square. Chris Rush has also helped to renovate strips for some Sunday matches.

Sadly, the turnout for the end of season renovation was poorly supported. On a more positive note the attendance for the patio improvement was superb well done to all of you for working very hard under the guidance of Alex Brunt and Jon Warner! At last we have a superb digital scoreboard which is a fitting tribute to our late chairman, Max Ralph. This was largely thanks to the generous donation from Doreen Ralph, which made this possible.

The 6-aside tournament and race night were the main fundraising events. Well done Alex Brunt, Lewis Rush, Mark Adams, Rosie Horsfield and John Bafico plus other helpers Also Zee for the tasty curry. I am not sure if everyone realises the hard work that has to be put in so that these events possible! The numbers attending the annual Dinner and presentation night were down this year and due to a misunderstanding as to whether or not the deposit was refundable a small loss was recorded. Well done all members who received their worthy awards. Thanks to Bev and Heather for selling the raffle tickets and Jane for her help with the draw.

Yet again Clive Ralph has done a great job in his role as treasurer. Perry Bush has maintained a superb website with some amazing stats and photographs and Mark Adams has kept us in order at various meetings. Thanks to Robert Warner for his on-going help with repairs and cutting the outfield. The standard of teas this year was yet again superb thanks to Marty “2 teas” for organising the rota. 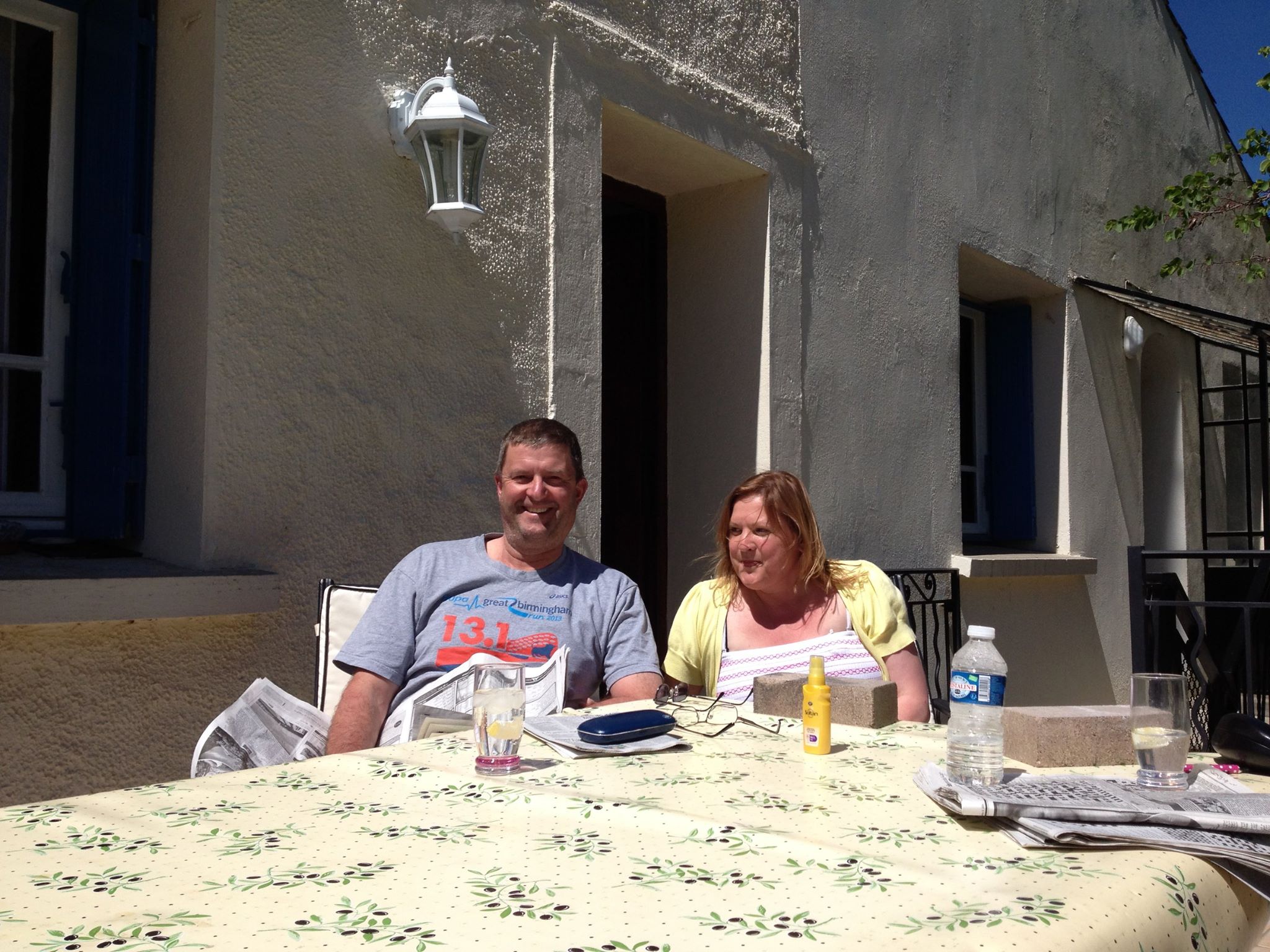 Tragically we have lost one of our Vice Presidents, Vicky Woollard affectionately known as VW. VW was always full of fun and energy and we will all miss her dearly. At the annual Dinner a fitting tribute was read by Alex Brunt followed by a toast courtesy of Mark Adams.

Hopefully projects for next year will include levelling the square and new wheels and hoses for the covers. 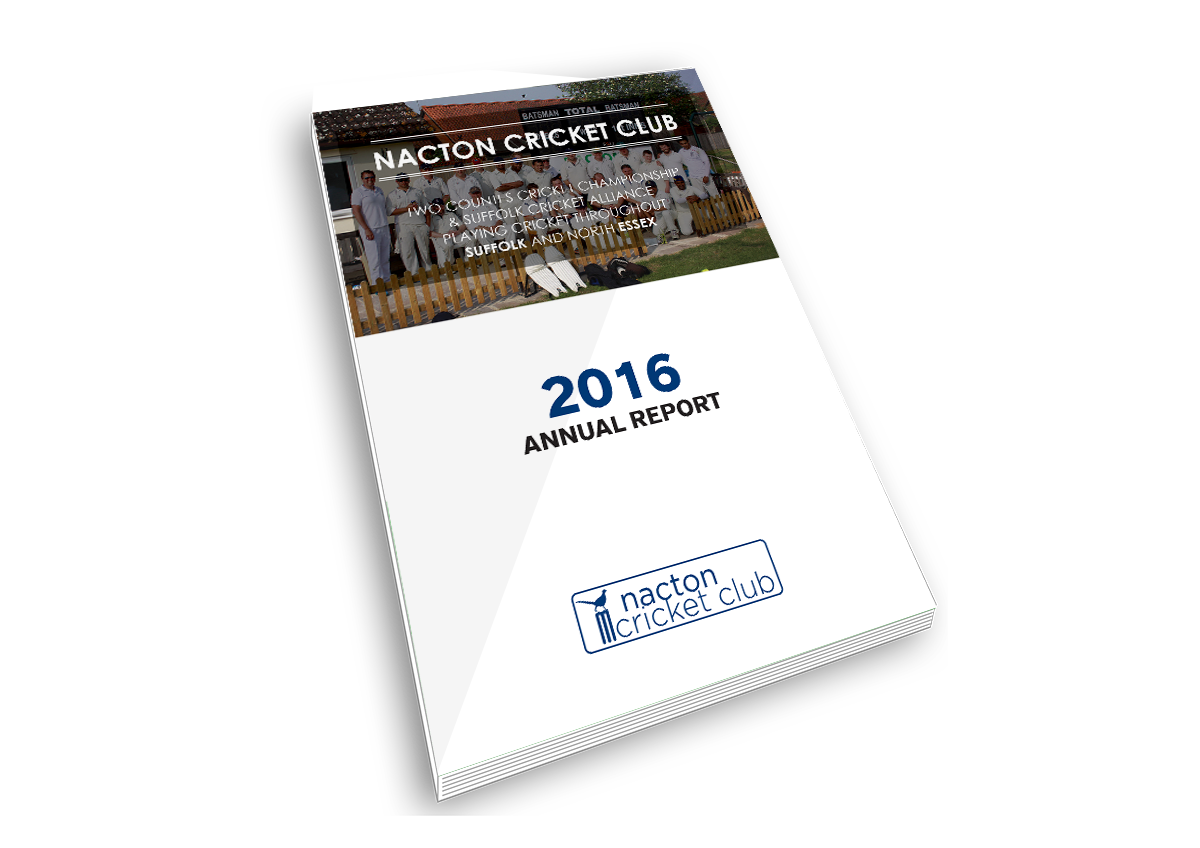 The report covers most of the items included in the Nacton Cricket Club website. This years report includes the Chairman's report, the 2016 Hertfordshire Tour report, an update on the pavillion project, club statistics and the clubs annual accounts. It is a PDF file around 9Mb in size. It is fully illustrated with photos from the season. 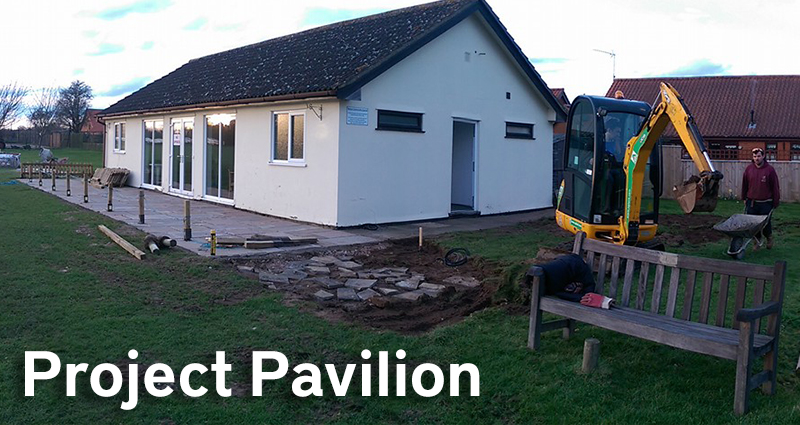 It was many years in the planning, with debates over what and how we could improve the Pavillion at “The Stadium”, work to improve the ground finally began in the spring of 2016.

Following a great fundraising effort by the club and plans ready, we approached the Nacton Village Council to seek approval to make the changes. We were granted the go ahead in the late Spring.

Original plans had been to build a new score box, with an electronic scoreboard incorporated, all of which would have fitted onto the front of the building. After getting estimates from local builders it was deemed far too expensive to proceed. It was then decided to move to plan ‘B’ which involved increasing the footprint of the existing patio and have that surrounded by a low-level brick wall. The Village Council were not convinced by the wall, so a wooden picket fence was chosen instead.

Work day one finally arrived and it was great to see so many of the club members turn out for the works party. Machines and men then got work lifting the old patio and digging down and levelling the area so that tonnes of concrete could be poured into the vacant space. When we say tonnes it really was tonnes. Some of it was back breaking work but with Jonathan Warner at the hands of the mini digger to do the hardest parts we finished day one ahead of schedule. 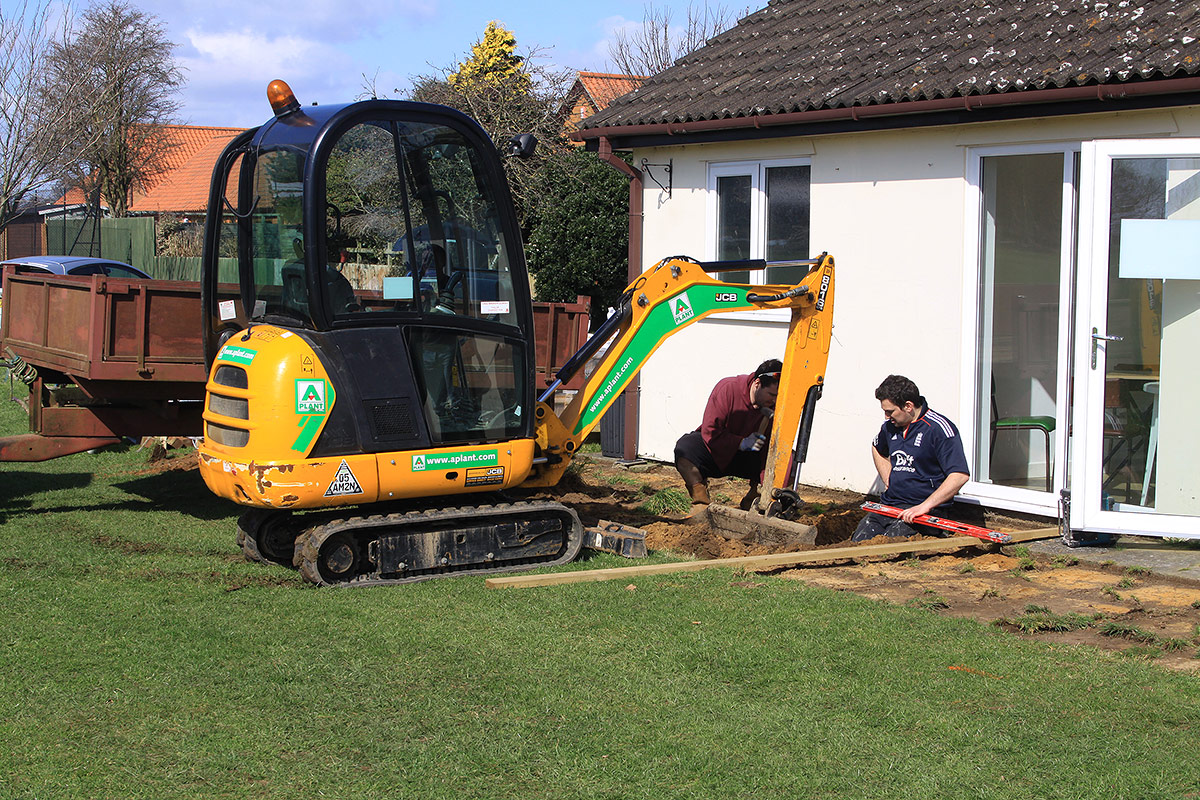 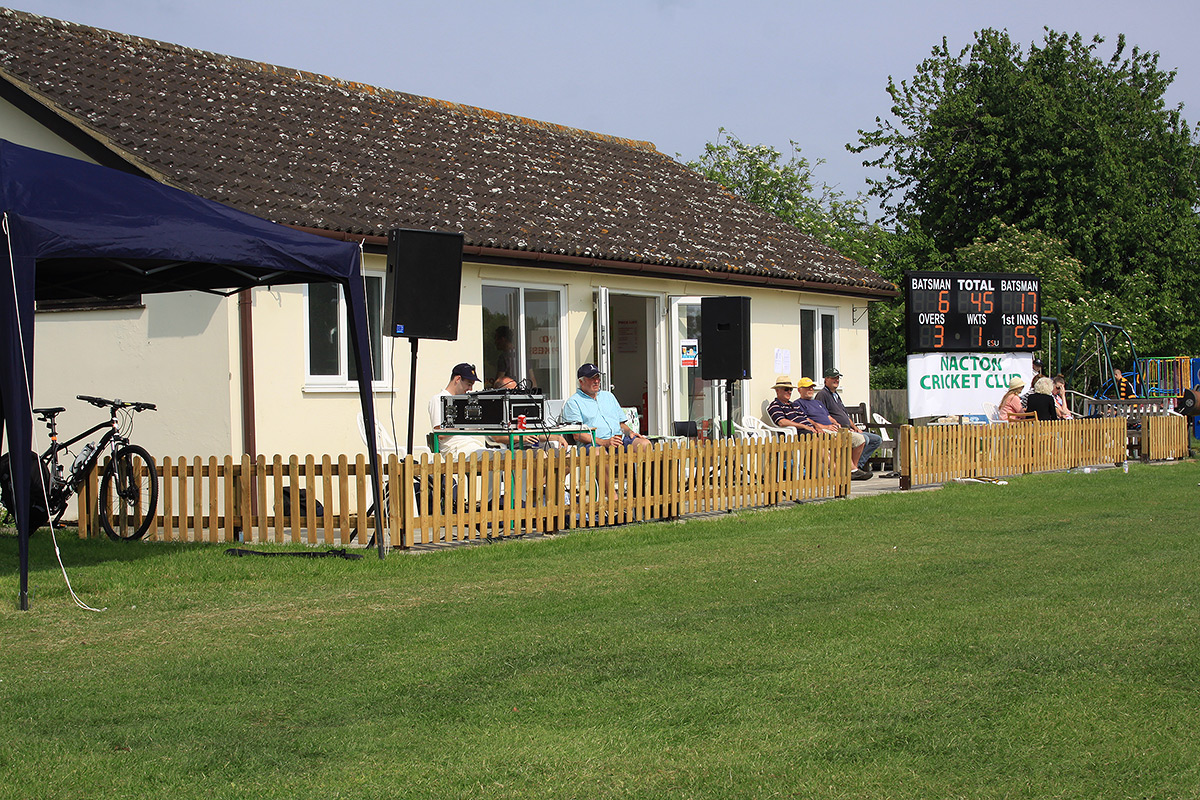 Day two saw more work continue with posts being sunk for the fencing and the ongoing efforts to lay yet more concrete onto which patio stones were placed. After much effort the bulk of the work had been completed within the two day target. The completion in such a short period of time wouldn’t have been possible with out the support of the club members. All that was left was to install the electronic scoreboard which was done a few weeks later prior to the start of the season. 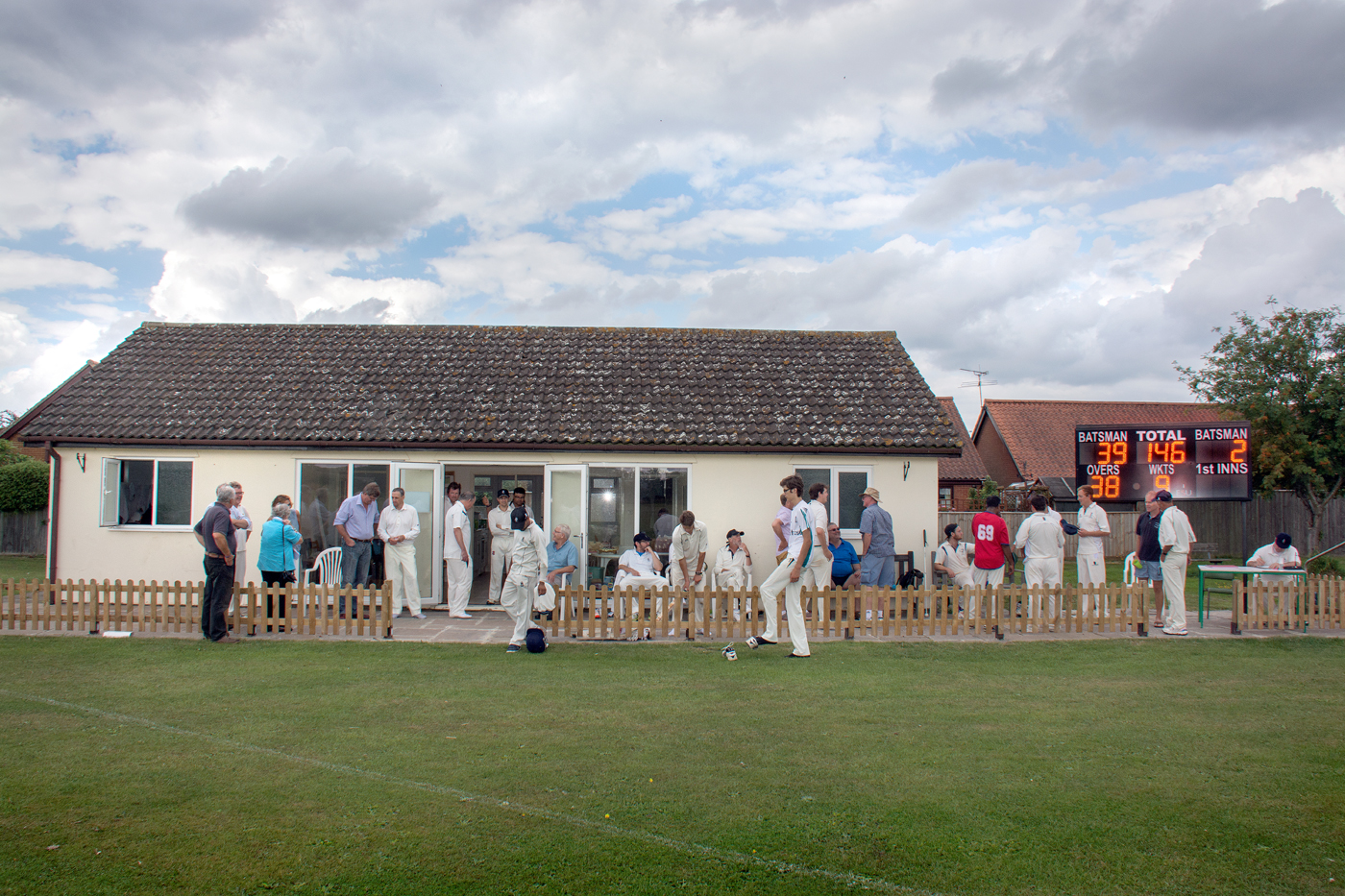